When you look at the lawn section in any lawn or online store, you may be surprised by the number of species and varieties of turfgrasses. At the first glance, they almost look the same.

However, differences between different types of turfgrass can be staggering – in terms of look and feel, but also the demands.

There is one major division of turf grasses – you can pick cool-season or warm-season types. You can choose easily between these two groups based on where you live and your local climate.

However, there are still a ton of types within both sections – and that is where the choice gets trickier.

Let’s take the warm-season grasses. Also known as southern grasses, there are as many as six species of them: Bahia grass, Bermuda grass, Carpet grass, Centipede grass, St. Augustine grass, and Zoysia grass. Some of them also have various cultivars.

The common feature of all southern grasses is that they have a high temperature tolerance, but poor cold and frost tolerance. Still, there are plenty of properties that separate each species. Each has a different resilience to environmental conditions, sun exposure, soil pH, foot traffic, plus gives a different feel and texture to the lawn.

The easiest way to learn about different turfgrasses is by comparing the two similar species, which is exactly what we’re doing in this series of articles.

This one makes for another blade-to-blade battle – battle of Centipede grass vs St. Augustine Grass, both very popular warm-season grass species.

We will consider what is the difference between Centipede and St. Augustine Grass, what are the pros and cons of each species, and what conditions they require to thrive and create a beautiful lawn.

When asking which one is better, Centipede grass or St. Augustine Grass, the easiest way to yield an answer is to compare them and consider key differences first.

However, some distinctions can make a huge difference.

For quick details on the difference between Centipede grass and St. Augustine Grass, see below:

Now, let’s move on to get to know these grasses even better!

Centipede grass (Eremochloa ophiuroides) got its name for a reason – its long, clingy runners (stolons) remind of the creepy-crawly invertebrate. Native to southern China, this light-to-medium green grass has been introduced to the US in 1916 and has since become one of the most popular lawn grasses.

But why is Centipede grass so popular? 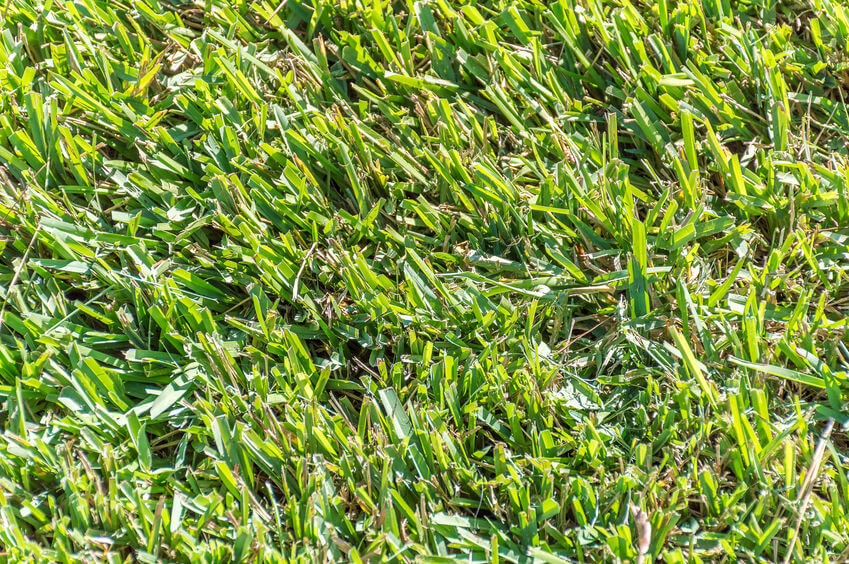 Secondly (but not less important!), it is one of the most low-maintenance grass types, thriving well with infrequent mowing and fertilizing.

You can thank the Centipede grass’s famously slow growth for both of these features. Once established, it is virtually weed-free as it forms a very thick turf, and it is pretty resistant to lawn diseases. And all of that without much effort!

Ok, but what does Centipede grass need?

Like all warm-season grass species, Centipede grass requires a warm climate with no frost, or just very little, incidental frost. In the case of a light freeze, it will turn brown, but it will recover as the temperatures start to rise. However, if the frost keeps repeating, it will eventually kill your Centipede grass.

Centipede grass has a shallow root system, meaning that, unlike some other drought-resistant warm-season grasses such as Bermuda grass, it will require watering.

Another very specific trait of Centipede grass is that it prefers sandy and slightly acidic soils (pH 5.0 to 6.0), which makes it a special snowflake amongst other turf grasses, which usually prefer neutral or slightly alkaline soil. That means that if you have acidic soil in your area, you won’t have to amend soil to make it more alkaline if you simply pick Centipede grass.

Centipede grass has some shade tolerance, and that’s great. However, it thrives in sunshine, so make sure there’s plenty on your lawn.

Another cool perk of centipede grass (is there an end to the list of its perks?) is that it doesn’t have a true dormancy period, meaning that your lawn will remain green throughout the winter – provided there is no frost. However, the same feature makes it vulnerable to winter freeze, since turfgrass takes much more damage from the frost when green. Winter damage can lead to more problems later on.

Hey, did anyone say “Problems?”

No creature is perfect, and let alone a turfgrass named after an invertebrate.

Truth be said, Centipede grass has very few drawbacks, but some of them may disqualify it from this competition if you have specific conditions and needs on your property.

It may be strange that a turfgrass with such tough and low-maintenance traits has a low traffic tolerance, but as I said – in some respects, Centipede grass is a very special green snowflake. If you get a lot of running around, playdates, or BBQs on your lawn, better pick another turfgrass species.

As we learned before, Centipede grass thrives on slightly acidic soils, but we haven’t covered what happens if the soil is alkaline, that is – unsuitable for Centipede grass.

If the pH goes above 6.0, the bioavailability of iron from the soil decreases. In simpler terms, plants need iron that is naturally present in the ground, but Centipede grass can take it up from the alkaline soil. An iron deficiency that will occur in time will cause the yellowing of the blades and can lead to a syndrome called Centipede grass decline.

Centipede grass is one tough species of turfgrass, however, when circumstances don’t work in its favor, it can begin to die. The sudden die-off of the Centipede grass lawn is called Centipede grass decline. To make things worse, the decline frequently occurs in early spring, right after the grass first greens and you’re all happy about it. The turf will first become discolored, then wilt, and eventually die. Ouch.

Centipede grass decline can be caused or worsened by a number of reasons:

Pros and Cons of Centipede Grass

Here’s my final judgment on Centipede grass pros and cons.

St. Augustine grass is one of the species you (and Elvis) could truly call “A green, green grass of home” – it is native to central and southeastern North America, and Central America. It has been naturalized all over the world too, mostly in coastal areas.

St. Augustine grass has a rich dark green color with broad, flat blades which give the lawn a coarse texture. Like centipede grass, St. Augustine grass also grows and spreads via above-ground runners, and it is also more than capable of forming a thick, dense turf.

These features make it a popular lawn grass in warm, tropical, and subtropical climates.

Another cool thing about this turfgrass is that it has several varieties of varying looks and sensitivities. The most common ones are Bitter Blue, Floratine and Floratam, although there are more of them.

St. Augustine Grass is one grateful turfgrass. It has a wide tolerance of soil conditions and pH values, provided that the soil is well-draining. That means you probably won’t have to test your soil or worry about adjusting pH.

Another reason why St. Augustine grass is popular is its high shade tolerance – possibly the highest amongst warm-season grasses. That makes it ideal for southern properties which feature a lot of large trees as well as for shady backyards. However, it is still a warm-season grass, so it won’t grow as lush and beautiful in the shade.

St. Augustine grass also does better with foot traffic, at least when you compete it against Centipede grass. It takes well to moderate wear but is still not very adapted to repeated trampling.

We all know the saying “no free lunch”, so there has to be some price to pay for the attractiveness and lushness of the St. Augustine Grass, right?

Here are a few sensitivities of St. Augustine Grass that require use of additional lawn care tools and extra maintenance effort.

St. Augustine is less tolerant to drought than its other popular warm-season turfgrass rivals such as Bermuda grass and Zoysia grass.

Also, St. Augustine grass is the least tolerant to cold of all the warm-season turfgrasses, which make it very susceptible to winter damage in case you get occasional frost. There are certain ways to make your St. Augustine turf cold-resilient, most prominently by applying the right fertilization routines. 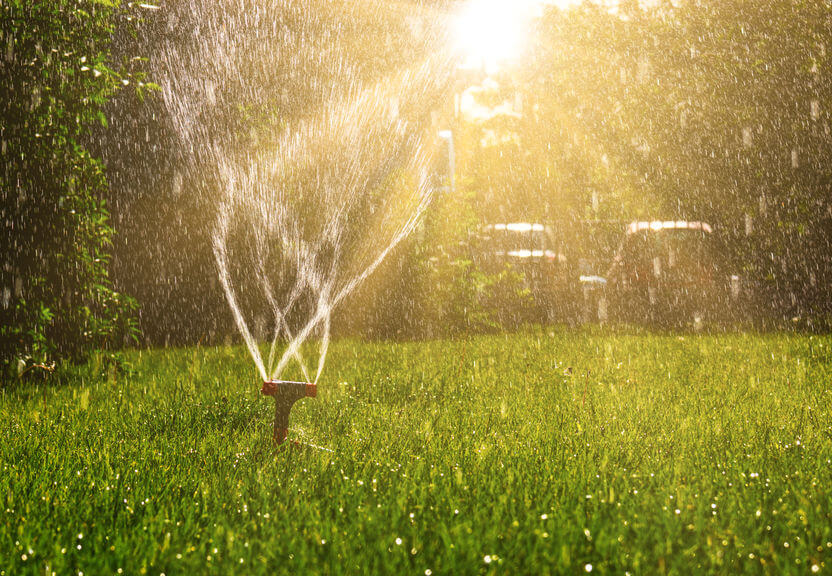 Unfortunately, St. Augustine grass is notoriously sensitive to a pest insect called chinch bug. Chinch bugs are like bedbugs of lawns – they live in the thatch layer and feed on the grass by piercing the stem plant with their specially designed mouthparts, and then suck away on the juice.

Chinch bug can be handled with insecticides, however, it requires frequent applications, which may be time-consuming, bad for beneficial insects and the environment in general, but also risky for human health.

Another alternative is to get a chinch bug-resistant cultivar of St. Augustine grass – Floratam. However, bear in mind that this variety is not as shade-tolerant as others.

If you are still undecided if St. Augustine grass is the right one for you – here’s a final quick overview of pros and cons.

In Australia and South Africa, St. Augustine grass is known as Buffalo grass, possibly due to the long tradition of it being used in pasturelands.

As you can see, the competition between Centipede Grass and St. Augustine Grass is a close one. Both types of grass do well in heat and poorly in cool climates, making them ideal for southern lawns. However, bear in mind that both will need help (irrigation, not the first aid kit!) in case of drought.

Centipede grass is one of the best grasses for easy-going and laid-back lawn owners since it’s amazingly low-maintenance and if the climate is right, you may be able to keep it green year-long. Still, with Centipede grass, you should take the laid-back approach quite literally, as this species doesn’t take a lot of traffic well.

St. Augustine grass does better with the traffic, plus does better in the shade in the shade. It gives you more cultivars to choose from, making it aesthetically more interesting. However, you will have to pay for it with additional care.

At the end of the day, the winner of the Centipede grass vs St Augustine grass match is completely up to you!

Do you have personal experience with these types of turfgrasses? What is the biggest difference between Centipede grass and St Augustine grass? Don’t hesitate and let us know in the comments!

Trees are beautiful, aren’t they? Marvelous wonders of the ecosystem, nature at its finest, vitally important to all life on earth. Unfortunately, it is inevitable that trees need to be removed...

Who here loves summer gardening? Everyone! Who hates heaving a heavy hose around to water the plants? Also everyone! That’s why hose carts were invented - to take the strain out of...