Crabgrass and quackgrass are both invasive species of grass that can set up residence in your lawn whether you want them there or not.

They can be hard to tell apart at first glance, and while they’re both hard to get rid of, there are some key differences you can look for to figure out what you’re dealing with.

And you want to know what you’re dealing with because crabgrass and quackgrass need to be controlled in different ways.

Read on to learn the differences and the best ways to control these species in your lawn.

The main differences between crabgrass and quackgrass are the temperatures they prefer and their root structure.

There are also differences in appearance that you can look for. Crabgrass has branching stems that grow in clumps resembling crab’s legs and the leaves have a yellow tinge. Quackgrass is more similar to ryegrass in appearance with a more evenly spread growth habit and pale blue-green tinge to the leaves.

Quackgrass also has one distinctive feature that crabgrass doesn’t, but you have to get up close to see it. Quackgrass has a clasping auricle around the base of the leaf that looks like a little collar.

Crabgrass is a warm-weather perennial grass that dies off in the winter but returns the following spring due to the numerous seeds it will have left behind the previous summer.

It’s not actually bad for your lawn per se. While it looks like it’s crowding out your other lawn species, it’s unlikely to completely out-compete them if your lawn is healthy, especially since it dies off in the winter.

The main con to crabgrass as a lawn species, and the reason it’s been labeled a weed, is exactly that, the fact that it dies off in winter and doesn’t look good.

But even though it’s now thought of as a weed with regard to your backyard, it’s nice to remember that the definition of a weed is pretty loose and a matter of opinion. Crabgrass is actually a really nutritious grazing crop for animals, and the seeds, otherwise known as Polish Millet, can be harvested for human consumption with multiple health benefits. 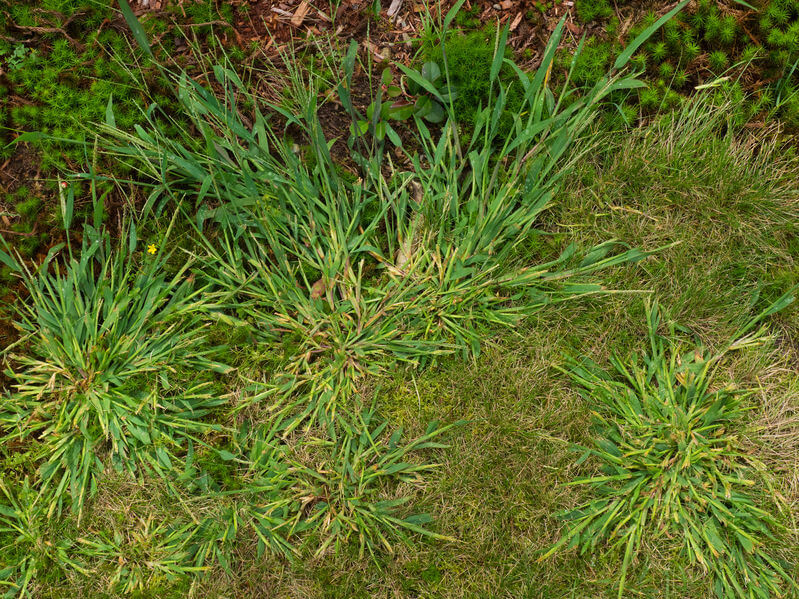 While these benefits are unlikely to count as ticks in favor of keeping crabgrass in your lawn, you do have the option of just letting it be, and provided you’re doing all the right things to keep your lawn healthy, it’s unlikely to completely take over.

But what if you do want to get rid of it?

How to Control Crabgrass

Unfortunately for the quick-fix lovers out there, once crabgrass is widespread throughout your lawn, there is no one-stop solution for getting rid of it. Its method of reproduction relies on producing huge numbers of seeds that remain dormant in the soil and re-emerge as new plants the following spring.

Quick tip: In order to effectively control crabgrass, you need to break its lifecycle by reducing the number of seeds produced, and this is something that needs to be achieved over several seasons.

Leave Your Lawn a Little Longer

Setting your mower to 3.5-4 inches through spring and summer will mean the slightly longer grass will shade the soil, blocking out the light and keeping it cooler which is less favorable for crabgrass seed germination.

You can cut it short again for the winter if that’s what you prefer.

Fertilize in the Cool Seasons

Crabgrass is less active in the cooler months so it will benefit less from your fertilizer applications, while your lawn will benefit more.

This means you’ll support the healthy growth of the lawn species you want, while not directly feeding crabgrass.

Rather than regular shallow watering, watering less often (every 3-4 days) but doing good deep water (enough to fill a tuna can), will support the grass species you want, while leaving the shallow crabgrass roots vulnerable to drying out between waterings.

Crabgrass will take up residence wherever it’s easy – this means that any bare patches of soil are basically welcoming crabgrass with open arms.

To prevent this, re-seed any bare soil with the grass species you want at the beginning of spring, and sprinkle extra seed over your whole lawn to keep it thick and leave no room for crabgrass. 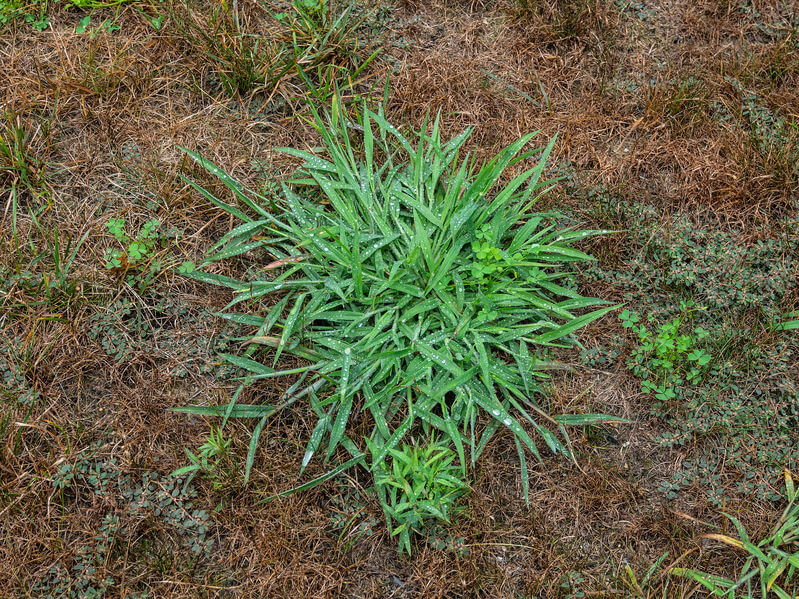 Manual weeding is actually more effective than herbicide use and should always be what you try first, assuming you’re just dealing with small patches and not your entire lawn.

Herbicide use should always be a last resort due to its negative environmental and health impacts. This means that when you use it, you want to make sure it’s actually going to do the job.

With crabgrass, timing is crucial. Too early or too late and you don’t prevent the release of seeds for that season which means you’ve missed the boat on having an impact until the following year.

Quick tip: Post-emergent herbicides are only effective up to a certain size of crabgrass, and only before it’s released its seeds for that season.

Once it’s starts getting big, it won’t work and your only option is to pull it up manually or wait for it to die in the winter and use a pre-emergent herbicide to prevent the seeds it’s left behind from germinating. However, remember that pre-emergent herbicides will also affect the seeds of other favorable lawn species too, weakening the health of your lawn.

Not sure whether you have Bermuda or crabgrass? Have a quick check with our guide that lays out the differences between Bermuda grass and Crabgrass.

Quackgrass, also known as quitch or couch-grass, is a perennial that prefers cooler weather. Quackgrass isn’t something you want in your lawn, as if your lawn is unhealthy, it will eventually crowd out all other species.

It primarily spreads through its root system which consists of rhizomes with sharp points that will pierce and grow right through root vegetables. It also produces seeds that can remain dormant for twenty years and survive being eaten by animals. 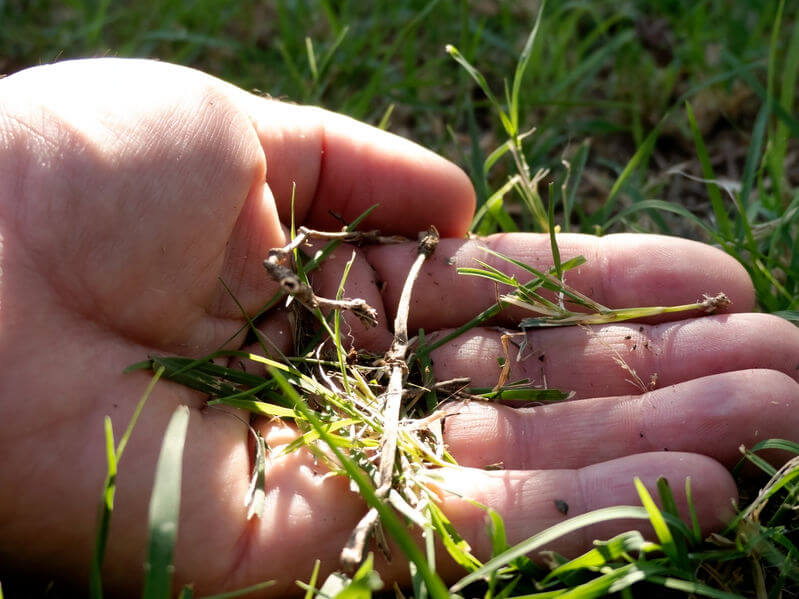 For gardeners, it’s the rhizomes that cause the issues, not the seeds. Every time you dig through your soil and break apart the rhizomes, you are inadvertently creating more plants that go on to spread.

If you have an area of garden which is prone to erosion, there are few other root systems that will hold your soil in place as well as quackgrass.

Owing to its dense network of rhizomes, the same characteristic that causes it to crowd out your lawn grasses will also serve as a very effective weed mat if you have an area of your yard where you’re trying to keep other weeds at bay.

Like crabgrass, quackgrass also has nutritional and health benefits for humans and animals. It’s a popular forage plant whose roots and rhizomes can be seen as either an emergency food source or an herbal remedy for numerous ailments. It was actually brought to North America deliberately by European settlers!

But, it can get really tall if left to grow, and it’s not as attractive as regular lawn species.

So what do you do if you want to get rid of it?

How to Control Quackgrass

Manually Remove With a Pitchfork

Assuming you’ve kept an eye on your lawn and just noticed a bit of quackgrass appearing, carefully digging it up, being sure to not leave any rhizomes behind, is the most effective control.

Pouring boiling water over the plant is also a great method of killing quackgrass if you have just a few to control.

You may need to do it a few times as the rhizomes will survive and produce new plants, but eventually, the rhizomes will run out of energy provided the grass isn’t given a chance to photosynthesize and you’ll kill it.

If you have a larger area than the above two methods aren’t suitable for, then scorching and starving the grass by covering it with mulch or clear plastic will also work. 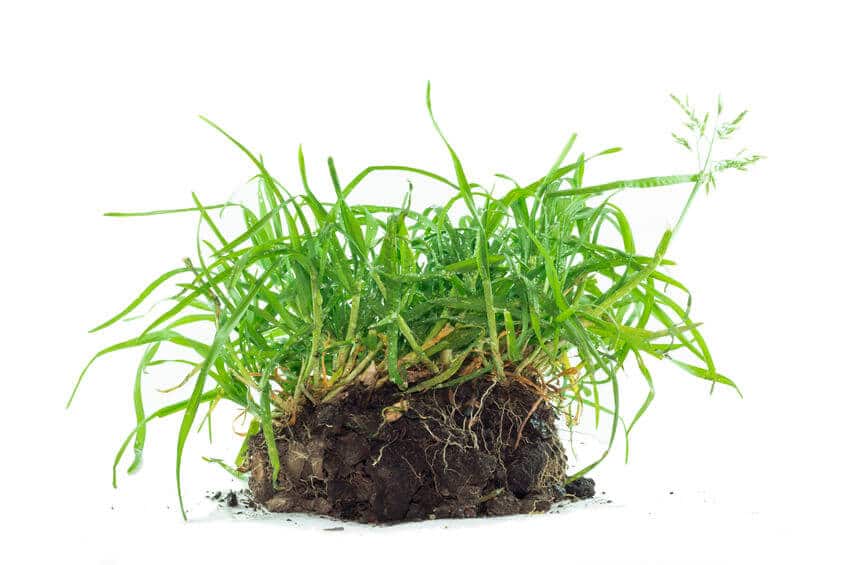 If quackgrass is in your lawn, mowing it regularly and short will prevent it from getting a chance to go to seed and help prevent the spread.

Just like crabgrass, if you keep your lawn healthy, lush, and strong, it will be resilient against a complete invasion and likely keep quackgrass under control by itself.

While not as effective as some of the above methods, glyphosate is the recommended herbicide for quackgrass if that’s the route you choose to take. However, glyphosate will also kill the lawn species that you want to keep, so you need to be very careful where you apply it.

Unfortunately, one application won’t work with quackgrass, as the rhizomes will not be killed with one dowsing. You will need to wait until the plant has regrown to spray a second and potentially third time in order to starve the roots of energy. Only then will it die – but repeated short mowing in spring will basically do the same thing.

As with many invasive species, the best way to control crabgrass and quackgrass is to prevent them from getting a good hold in the first place. This means keeping your lawn as healthy as possible and avoiding simple lawn care mistakes that could allow invasive grass to take over. If you’re new to maintaining a yard, have a read of our guide to lawn care tools before you get started.

Maintaining a regular mowing, fertilization, and irrigation schedule will keep your lawn dense and healthy and give a better chance at resisting the influx of invaders.

Remember that for crabgrass, a higher mowing height will help to control it, while for quackgrass, mowing shorter is better.

But there also other lawn mowing tips that you can bear in mind to help keep your lawn healthy and better able to resist the influx of invasive species and different lawnmowers to consider too.

Keeping an eye on things will also mean that you notice straight away when an invasive species has arrived and can tackle the problem while it’s manageable and before it’s taken over your whole lawn.

As you can see, there are some key differences between crabgrass and quackgrass that should make it easy to tell them apart in your lawn once you know what to look for.

The main differences are the growth formation and the color. But remember, they need to be managed differently too, so make sure you know what you’re dealing with before you start the attack!

Have you had crabgrass or quackgrass in your garden? How did you deal with it and were you successful? Feel free to share your thoughts in the comments section below!

link to Top 13 Best Organic Gardening Tips for Your Garden

I’m sure you’ll agree that gardening is much more fun when it feels easy. We get into gardening for the rewards, not because we want it to be hard, right?

No one wants mice to create a breeding ground for their home. But there must be other ways of deterring mice aside from the classic mousetrap, right? There are!