Evolution has hardwired the color green into human brains as a symbol of life, proven to uplift mood and feelings.

When you consider that, it is no wonder that a lush green lawn became a symbol of health, abundance, and prosperity in modern culture.

Likewise, the neglected, patchy, yellow lawn signals that something is off with the property or the owners.

However, the truth is that an unsightly lawn can happen to anyone.

Even dedicated gardeners get bad luck from time to time. We’ve all been there. Most notably, bad weather – a factor you absolutely can’t control – is a risk factor for the appearance of lawn diseases.

Lawn rust is one of them.

Unlike many other turf diseases that prefer low-mown and aggressively groomed turf, lawn rust tends to appear in taller turf and is frequent in residential areas.

Okay, I know that sounds terrifying. You’ve been keen on following the best advice on warding off lawn disease, which includes setting your mower deck high, and now you find out there is a disease with that exact preference. Eek!

But don’t worry – there are still ways you can ward off lawn rust or treat lawn rust if it appears on your precious living green carpet. Let’s learn how.

What Is Grass Rust?

Lawn rust or grass rust is one of many foliar fungal turf diseases. In common terms, that means that certain molds (fungi) attack the grass leaves or blades, damaging the lawn in the process.

Lawn rust is actually more of an umbrella term than a single disease as various fungi can cause it.

The most common lawn rust-causing pathogens belong to the genera Puccinia or Uromyces.

However, all of them cause similar symptoms, and infected areas can produce a huge number of air-borne spores for further spread of the fungi.

What Grass Species are Susceptible to Lawn Rust?

One of the lucky circumstances about this pesky disease is that it almost exclusively affects two turfgrass species – the perennial ryegrass and the Kentucky bluegrass.

However, since these are some of the most common turfgrass species, the disease is a significant common lawn problem.

How does Lawn Rust Spread?

Lawn rust is a disease of wet summers and damp autumns, with autumn being its favorite season because of the heavy dews and frequent precipitation, and less UV radiation from the sun.

The lawn rust-causing pathogens show this seasonality because the spores need several hours of wetness to germinate and infect the grass blades.

The wind spreads the spores. Due to being lightweight, they can stay airborne for a long time and be carried over long distances. Luckily, the infection cycle is relatively slow.

Why Does Lawn Rust Appear?

As the lawn-rust-causing spores are essentially everywhere, you may wonder why some lawns get infected while others do not, even when the weather conditions for the lawn rust spread are favorable.

Besides the climatic conditions, other local circumstances will decide if your turf will succumb to the infection or not.

As I said priorly, rust often appears on tall, high-mown, or unkept grass. Also, it will often appear in places where trees overhang the lawn (yes, the favorite summer picnic spots) as the water-soaked grass is slower to dry in these spots.

Still, that’s not the whole picture. Besides being tall and shaded, the turf that is prone to rust attacks is likely stressed and vigorless.

The stress most usually occurs due to nutrient deficiency or drought stress, meaning that periods of drought followed by periods of rains and humid weather are very favorable for lawn rust occurrence.

What Are The Symptoms of Lawn Rust?

When looked at from afar, the most common first sign of lawn rust is the yellowing of the affected patches. Not yellowing like drying, but like real yellow color, with yellow-greenish borders (the exact hues can vary).

The color is there because small, but numerous spore-containing pustules appear on the blade’s surface. Usually, they are yellowish-orange – or rusty – in color.

The spore-pumped pustules explain the most displeasing side-effect of lawn rust. If you walk through the affected area, the pustules will explode and release thousands and thousands of spores.

These will stick onto anything, and because of that, they can cover your shoes, clothes, dogs, mowers, and all other equipment that gets dragged over the lawn in rusty hues. Who knew that getting moldy can be that colorful (but it’s yucky still the same)!

This is the irony of the grass rust disease. While the fungus itself is not particularly dangerous for the grass (unlike its many other dreaded fungal cousins) and the effect is largely cosmetic, it is one of the rare grass diseases to affect the lawn users by coating them in its spores.

The fungus party may become less colorful in the fall as the organisms can switch to producing black spores intended for over-wintering.

As for the grass, only the severely affected leaves may become brown and shriveled. However, lawn rust is not a very aggressive disease and doesn’t usually kill its host.

How do I Get Rid of Rust Fungus on My Lawn?

As with any other fungal lawn disease, there are two main ways to control grass rust by improving general lawn management (cultural methods) or applying chemicals – in this case, fungicides.

Before we look at both methods, it is worth noting that the chemical control of lawn rust in healthy, mature lawns is usually unnecessary because the disease tends to go away on its own.

Even lawns that get really rusty in the fall will most likely produce healthy new blades by the following early summer. If the weather conditions are better, the lawn rust may not return at all.

How To Treat Lawn Rust Without Chemicals?

Good cultural practices are your first line of defense against grass rust and other diseases.

Just by tweaking your lawn care to-do list and adding a few pieces of equipment, you can prevent or curb the spread of a disease like lawn rust.

If you assess an area of your lawn is at risk of grass rust, you can use a wetness-reduction technique such as whipping or rolling to control the autumn dew.

This Push/Tow Poly Lawn Roller by Brinly features a sleek design that allows you to both push and tow, adding to the tool’s versatility. Also, the new drum plug design makes filling and emptying the roller extremely easy. 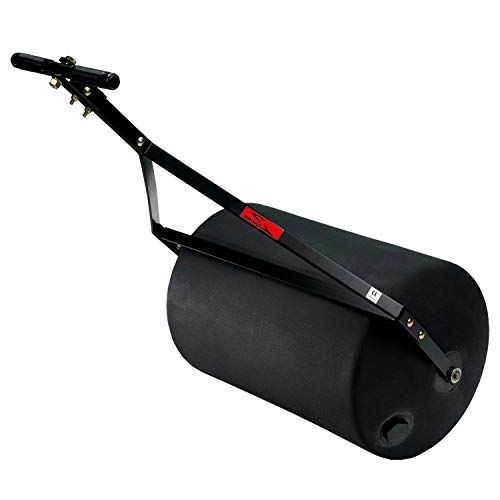 Despite the transient nature of lawn rust disease, there still may be reasons to resort to chemical control.

One of these scenarios is that the disease keeps returning or has caused substantial damage without showing signs of subsiding.

Also, you will want to treat the very young, newly seeded grass because the infection can prove to be too much, and you may end up losing the turf.

The rule of thumb is that when it comes to newly seeded strands, fungicides should be applied as soon as you notice the disease; on well-established turf, you should only use fungicides as a remedy when cultural control fails.

There are no specific fungicides for lawn rust, but the practice has shown that commonly found DMI and QoI (strobilurin) are efficient against it.

If you want to explore which is the best fungicide for lawn rust further, check out this table by NC State University.

As you can see, Syngenta’s Concert and Banner Maxx have been rated as highly efficient and as carrying only a medium risk of resistance development. Another lawn rust treatment option is a clever application of lawn fertilizer.

Since the turf that grows slowly during the mid-and late-summer pause is the most vulnerable to rust outbreaks, nitrogen fertilizer can be used as a chemical treatment as well.

Apply small amounts of the (0.2-0.5 pound of N per 1,000 square feet) in the commonly problematic spots. The nitrogen will help the grass grow and allow mowing, helping the turf literally outgrow the disease.

Maximum Green & Growth High Nitrogen “Lawn Food” has an NPK ratio of 28-0-0. It’s in liquid form, easily and instantly accessible to the masses (of grasses, that is). 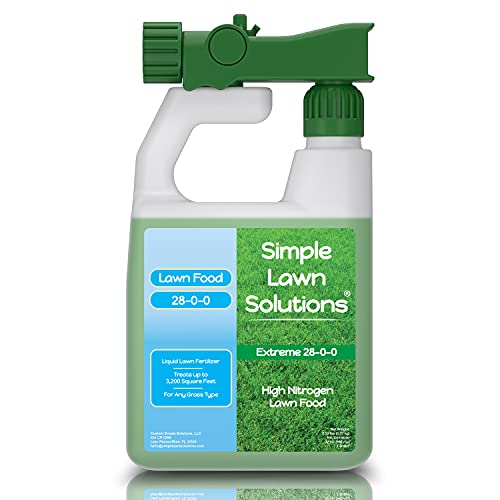 Another special thing about it is that it is a quick-release (70%) and slow-release (30%) component. It is intended for use in spring and summer, which perfectly fits the description of a fertilizer that can help your turf beat the lawn rust.

Lawn rust can seem like an intimidating turf disease. Its alien, rusty fairy (spore) dust is not something you would want near you – or on you – and you may get desperate at the very thought of dealing with this band of grass-loving fungi.

However, things are not as scary as it seems. Well-established, mature lawns are at almost no risk from losing the battle with the rust-causing fungi and will usually recover on their own.

On the other hand, the young, freshly seeded lawns have been known to succumb to grass rust; however, the help is out there, as there are highly efficient and widely available treatments (no, not WD-40 – it’s not that rust).

Above all, simple cultural practices – the ways you maintain your lawn – can easily prevent the disease from appearing at all. Feed your turf during the growing season, mow regularly and watch out for excessive moisture, shade, and bad air circulation.

Did you have hands-on experience with lawn rust? How did you beat it? Please share your valuable experience in the comments!

link to Top 13 Best Organic Gardening Tips for Your Garden

I’m sure you’ll agree that gardening is much more fun when it feels easy. We get into gardening for the rewards, not because we want it to be hard, right?

No one wants mice to create a breeding ground for their home. But there must be other ways of deterring mice aside from the classic mousetrap, right? There are!