Did you know that there are actually 3000 different kinds of earthworms?

If you’re passionate about gardening, at some point you’re going to wonder about the difference between compost worms versus earthworms in general.

How do you tell them apart, what are their key differences and why do you want them in your life?

I’m going to tell you!

Earthworms are segmented annelids that live in the soil and feed on decaying organic matter like leaf litter and dead roots. They require a moist environment so they don’t dry out and will often burrow deeper into the ground in dry conditions. 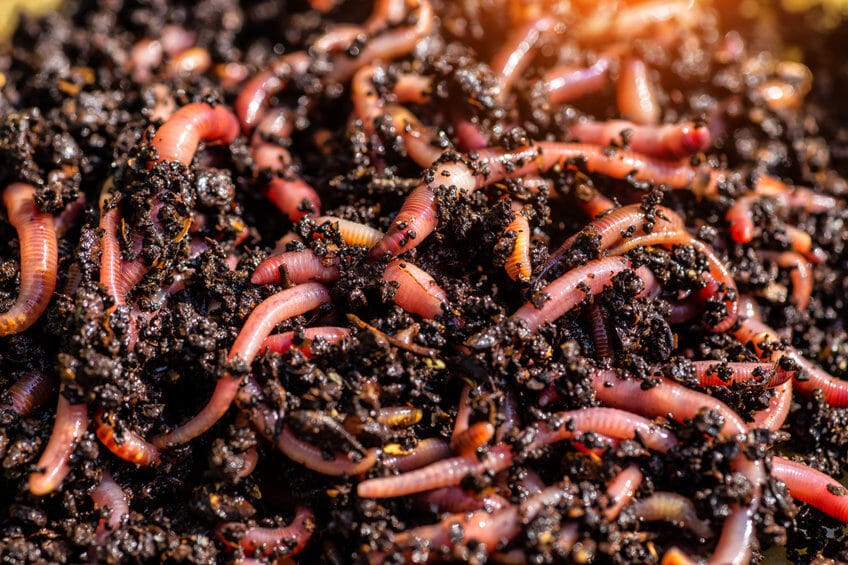 When we say earthworm, we’re most often referring to the most common earthworm species that you’d find in your backyard. But what you may not have realized is that there is more than one species populating the soil in your garden.

Most earthworms in the United States were introduced with the arrival of Europeans in the 1600s. Prior to the last ice age, there were native species of earthworms throughout the continent. There remain around 100 species of native earthworms today, though they are often outcompeted by their European counterparts.

The most common earthworms that you’ll find in your backyard in the U.S. are the Lumbricidae family which includes Lumbicus Rubellus, or red worms, and Lumbicus Terrestris, or the nightcrawler. Some Lumbricids are endemic to North America but most are not.

There are three categories of earthworms, divided according to where they live and how they form tunnels.

Compost worms are a kind of earthworm.

But while there are many, many different kinds of earthworms, there are only a few that work well for composting. 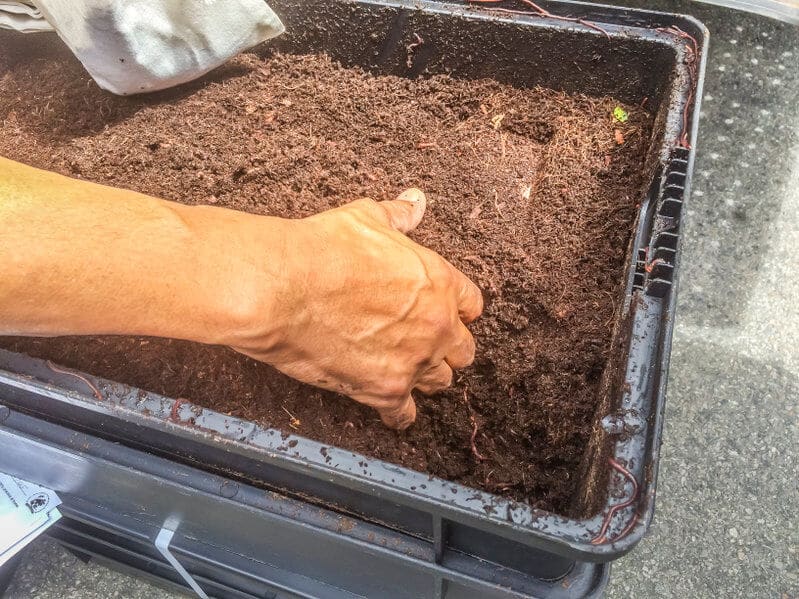 The most common species of worms for compost use are the Eisenia Fetida and Eisenia Andrei, or red wigglers. But Lumbicus Rubellus, or red worms, are also suitable.

The reason red wigglers and red worms are great for composting is where they hang out.

Most earthworms burrow deeper into the soil with their food which isn’t ideal in a worm farm situation. Red wigglers and red worms, as explained above, are epigeic, meaning they hang out near the surface, constantly traveling upwards towards new food sources as you add more layers.

This means that they effectively decompose everything placed in the worm farm, leaving layers of beautiful vermicast behind, underneath them.

They regularly eat about half of their body weight in food per day, quickly breaking down waste into nutrient-dense excreta. And they reproduce very quickly, meaning that as long as conditions are ideal (temperature, humidity, acidity, and food supply), you will have a thriving population of worms in your compost.

In saying that, they typically tolerate a wider range of temperatures than other earthworms. This means they are better able to survive in a worm farm which may experience a greater variation in temperature than the ground.

What Are the Main Differences: Compost Worms vs Earthworms

The most obvious differences when it comes to telling apart compost worms from other earthworms are their size, color, where they live, and what they feed on.

Like their name, red wigglers are redder in color than other earthworms which tend to be a more purple, grey color.

As mentioned above, where they hang out is the defining difference between red wigglers and other earthworms.

Red wigglers prefer to hang out near the surface, traveling upwards to find more food. Other earthworms prefer to be deeper in the soil, burrowing downwards and living on the organic matter than is already underground.

Red wigglers eat a wide range of organic matter (and a lot of it), including most household vegetable waste, newspaper, coffee grounds, compostable tea bags (be sure to check that your tea bags don’t contain plastic), leaves, and cardboard.

Most earthworms on the other hand have a preferred diet of leaf litter, decaying plant matter, fungi that live on the roots of plants, and even the soil itself.

How to Identify Red Wigglers and Red Worms

Since you can’t find them in your garden, it’s unlikely that you’ll need to know how to identify red wigglers.

Red worms, on the other hand, you might be able to find hanging out near your compost heap or under a rotting log. But, in saying that, you’ll still probably be hard pushed to tell them apart from other earthworms.

The main identifying features you can look for with red wrigglers are their size, color, and tiger-like stripes when they’re stretched out.

Red wrigglers are usually 3-4 inches long, red, as their name suggests, sometimes with slightly lighter red or yellow tip on their tail, and when they stretch out, their segmented body appears striped with a lighter pink color. In fact, in some countries, these worms are known as tiger worms instead of red wrigglers.

Red wrigglers also have a clitellum, or saddle, a segment of their body near their head, that is noticeably wider than the rest of the body. Other worms’ clitellum is more likely to be the same width as their bodies.

Red worms are very similar, although they may have a slightly more brown tinge to their color, though, as mentioned above, it can be very hard to tell these worms apart! 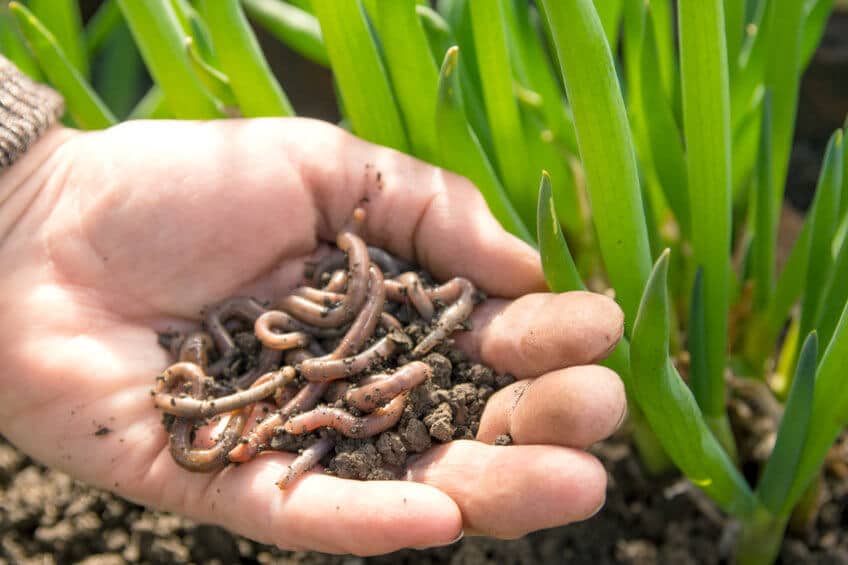 If you want some red wigglers for your worm farm, you’ll need to get some from a friend (you don’t need many as they reproduce quickly) or purchase them since you won’t find them in your garden.

As you’ve probably guessed by now, the main benefits of red wigglers are their use in vermicomposting.
They speed up the composting process by breaking down organic waste at a faster rate than microbes in a regular compost heap.

They also eliminate the need to turn compost heaps, and they leave behind vermicast, or worm feces, which make some of the best fertilizer in existence.

Keeping a worm farm is one of the most impactful things you can do if your aim is to live more sustainably.

Food waste accounts for a huge amount of landfill in the U.S. which contributes significantly to greenhouse gasses in the atmosphere, so using worms to help turn this waste into nutrient dense compost for your garden is hugely beneficial on many levels.

The benefits of other species of earthworms in your garden mostly come from their burrowing habit which aerates the soil, keeping it loose and healthy.

Earthworms also break down organic matter, fertilizing the soil with their excreta which is an essential role.

Are There Any Cons?

Surprisingly, yes. Though not for your garden.

The cons of earthworms in North America come about when earthworms enter the native forest. The very things we love them for in our gardens – their ability to aerate and loosen the soil, and making nutrients more available – favors invasive plant species over native and has the potential to increase erosion.

You can help to prevent the spread of introduced earthworms in native ecosystems by choosing non-invasive species of worms to use for bait if you’re fishing, and being careful where you dispose of unused bait.

In your garden, earthworms are only good!

Surely after all of this worm talk, you’ll be itching to get your own worm farm started?

It’s easier than you might think to get started. Have a watch of a video like this to get the basics sorted.

Make sure you have some understanding of the conditions that your worms prefer and how to keep them happy.

This includes moisture, temperature, pH, amounts, and types of food.

Worms like it moist, but not too moist! They prefer moderate temperatures, a fairly neutral pH (6-7 is ideal), and just enough food to keep them munching but not so much that other critters are attracted to the uneaten waste. (There are some handy tools available to help with this!)

They love to eat most fruit and vegetable scraps, paper, cardboard and some grass clippings, but things to avoid are greasy/fatty foods, animal products, grains, onion, tomato and citrus. (If this is a lot remember, stick a poster like this one up on your fridge so that you and other family members can easily double check.)

A great tip is to use rainwater to splash on your worm farm to keep things nice and moist and protect the worms from the chemical and mineral content of tap water. 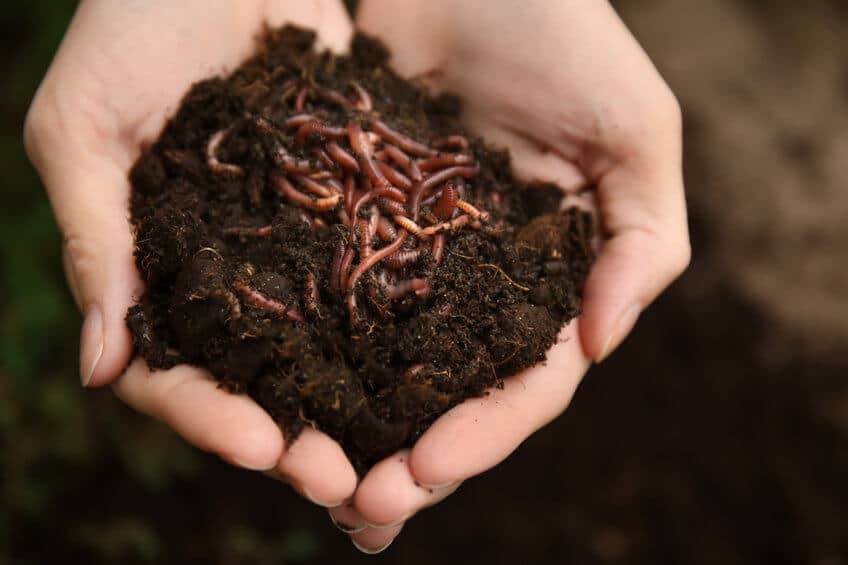 It’s also worth remembering that you shouldn’t handle worms with your bare hands. Instead, use gloves to protect the worms from the oils on your skin.

If you’re not quite ready to delve into the world of worm farms, using a compost tumbler is one of the easiest ways of keeping a home compost.

As you can see there’s a little more to it than a simple compost worm vs. earthworms comparison.

Compost worms are a kind of earthworm, they are just a species of earthworm that behave in a way that make them well suited to helping us out with our composting needs.

If you’re just getting into the garden game, have a read of our intro to lawn care tools and ensure you’ve got all bases covered. If you’re on the veggie garden train, a soaker hose is one of the best investments you can make for effective irrigation while conserving water.

Have you got a worm farm? Are you loving it? Feel free to tell us all about it in the comments!

link to Signs of Lawn Heat Stress & How to Treat It? (Answered!)

Most of us love long hot summers, where we can get our vitamin D fix, and enjoy barbecue and pool season to the max.I wish I could say the same for our lawns.Blazing sun, coupled with little...

Continue Reading
link to Dormant Grass vs Dead Grass – How to Tell the Difference & What to Do?

During the shoulder seasons of spring and autumn, you might notice an unsightly brown tinge to parts of your lawn.Or maybe even all of it!Either way, it’s not the most encouraging sight...

My name's Gibson. Andy Gibson. I like to think of myself as the Bond of the backyard, that is if yard work ever became sexy. I write about everything about lawn care and gardening and the dread-it-but-still-need-to-do-it chores around the yard, like cleaning out the gutter guards.