DEATH TO ALL WEEDS!

But those attention-grabbing bottles both online and at the big box stores don’t actually help when it comes to finding out which is the best!

In this article, we put two herbicide heavyweights up against each other – Spectracide vs Roundup.

Which product will come out on top? Keep reading to find out!

Roundup vs Spectracide – The Short Version 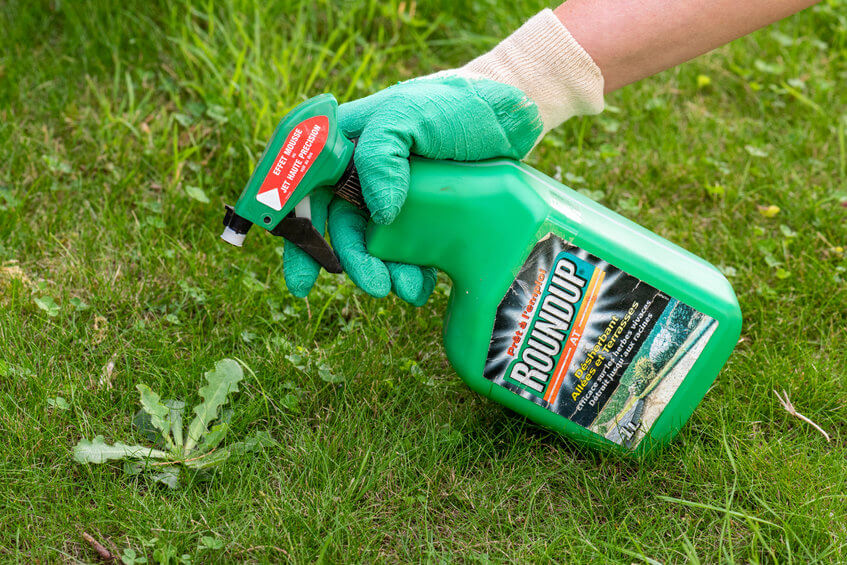 For anyone in a hurry, here’s the super-short summary of this article:

While there might be a notable difference depending on the formula you’re using (Spectracide is mainly a line of insect control products), this is the general Spectracide weed and grass killer vs Roundup result:

Roundup is arguably more powerful than Spectracide – but it’s thought to be more toxic and harmful as a trade-off.

It’s that simple, and, to be honest, most gardeners don’t report much of a difference when either product is applied correctly.

But the toxicity should be an important consideration when you’re deciding which herbicide to use – and where you’re using it. Spectracide is still a potentially harmful chemical.

For more information – including what’s in each product, stay with us and continue reading.

Roundup is the brand name of a line of weed killers made by German multinational company Bayer Pharmaceuticals. It was originally invented by biotech company Monsanto, which was taken over by Bayer in 2018.

And while they have an extensive range, for the purposes of this article, we’re going to be looking at their Concentrate Plus Weed Killer.

It is a systemic, broad-spectrum, non-selective herbicide. To understand more what that means, you can read this article on the different types of weed killer which busts all the jargon.

Roundup was invented in the 1970s, and quickly became the number one choice for weed killing in the USA.

The reason for this is its active ingredient, which is something called “glyphosate.” Glyphosate is the most widely used herbicide in the United States, today.

However, it’s not without its controversies, and has spent a long time in the news due to various lawsuits over whether it’s carcinogenic or not.

While some juries have ruled that excessive exposure to glyphosate does cause cancer, in general, evidence has proved largely inconclusive for the average homeowner.

Several bans have been lifted, while some remain in place.

Either way, Bayer has declared that it will be reducing/removing glyphosate in its home and garden products from 2023, and continuing to use it with agricultural herbicides only.

At the time of writing, however, this particular product contains 50.2% glyphosate isopropylamine salt.

Regardless, many gardeners are looking for alternatives now, as while it’s extremely effective at what it does, it’s still a harmfully potent, toxic chemical.

And if you are looking to remove weeds in your lawns without harsh products, you can find plenty of suggestions at that link, or you can go here to discover safer alternatives to Roundup.

The video below shows a good example of how to apply it:

Like Roundup, Spectracide is a brand name that covers multiple products designed for the control of undesirable organisms on or in our properties.

It is owned by Spectrum Holdings Inc., an American diversified company based in Middleton, Wisconsin.

One of the main differences between the two popular herbicides, is that Spectracide is first and foremost an insecticide company, with an extensive range of pest killers that target the likes of wasps, ants, and termites.

But it’s their weed-killing products that we’re interested in, which are predominately selective herbicides for use in lawns. In short, these products kill weeds and not your grass.

However, in the interests of keeping a level playing field, we’re looking at Spectracide’s Weed & Grass Killer Concentrate, a comparable product to the Roundup option included above.

Again, like the Roundup product, this is a non-selective, broad-spectrum herbicide that kills all the way down into the root, following a foliar application.

But that’s where the similarities end – with the active ingredient, at least.

Quite a change from the glyphosate-base of Roundup!

You can take a look at it in action by watching the video, below:

Let’s get down to brass tacks – this is basically what it’s all about.

So, what do they actually do?

Diquat is not a systemic herbicide by itself, and will only kill the parts of the plants it touches. However, Spectracide includes other ingredients that will help eradicate the weed to the root.

Glyphosate, on the other hand, is a systemic herbicide, and will effectively kill every plant cell as it works its way through the whole organism.

This is why you have some websites claiming – incorrectly – that Spectracide doesn’t kill the entire weed. While that’s not strictly true – it is true of diquat dibromide, hence the confusion.

After all, even with a fast-acting herbicide, there’s going to be no point if the weed is only going to come back!

With the limited chemical knowledge that I have, and in researching this article, I’m making an educated guess that Spectracide (and diquat) acts faster than Roundup (and glyphosate), but Roundup is much more potent in general.

While we’re not able to physically test the two products, we can offer a general guide to the differences between them.

A dead heat here, both herbicides are designed to kill the same undesirable plant life to the root.

Again, neck-a-neck here. Although Roundup is probably the better choice for clearing a new area to be used for something else.

It might look like Roundup wins this battle, but I’d take those figures with a very large pinch of salt, and refrain from planting anything (especially vegetables) until a week after application – maybe more. 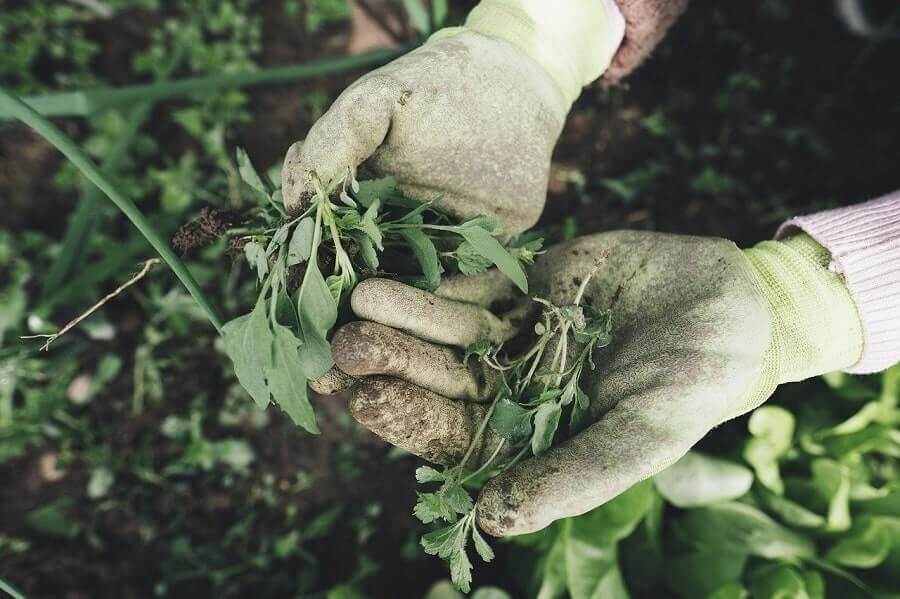 Also, be aware that this comparison is for the products listed above. Some formulas are more residual than others, and care should be taken when using weed killers on land you wish to repurpose.

For the price, Roundup wins this round, and you’re getting more bang for your buck when it comes to ounces for your dollar.

Spectracide is faster to dry and be protected from rainfall than Roundup – but there’s not much in it. Either way, make sure you’re applying a weed killer well before the clouds open.

Tank sprayers are best used for both herbicides, although if you have a large area to cover, you might need more product and one of these tow-behind sprayers, instead.

On the surface, it looks like you’ll see visible results with Spectracide faster than you will with Roundup – which is to be expected thanks to its active ingredient.

Again, don’t read too much into that – and you need to/should wait at least 24 hours to properly start to see the effects of most herbicides.

Spectracide – generally satisfied, but some reports that the weeds come back.

Of the reviews I researched, Roundup is undoubtedly the winner – but maybe that’s simply because it’s the more well-known, household name? Perhaps there really is no such thing as bad publicity?

*At the time of writing.

For this particular herbicide, Roundup is surprisingly the cheaper option – as you’re getting more product for your money. But overall, Spectracide tends to be the budget-friendly choice.

Roundup vs Spectracide – The Verdict

If you need to totally decimate an area of plant life, then I would suggest using a Roundup product. You can’t argue with the reviews, and there’s no doubt that it does the job with aplomb.

Roundup offers so many options that there’s bound to be a formula for use for just about anywhere and on anything around your property.

Check out this review on the best weed killers for patios and driveways, for example – which also contains a number of Spectracide products.

However, if you’re at all concerned with using glyphosate and the effects it might have on your health, then perhaps it’s better to choose a Spectracide product.

I would also lean towards them if you’re looking to control weeds in your lawn, as they seem to have a well-received product line of selective herbicides that won’t kill every living green thing.

That said, just because Spectracide hasn’t been the subject of a number of lawsuits, doesn’t mean it’s still not a harmful, toxic substance.

And it’s been proven to be particularly dangerous to aquatic life.

Regardless of the type of herbicide you choose, you need to take great care when it comes to its application. Avoiding run-off and damaging drift is essential.

And always wear PPE to keep yourself out of harm’s way. If you’re doing a lot of spraying, I’d highly recommend using a respirator.

But there are many types of gardening methods, and it is possible to refrain from using chemicals altogether.

I would strongly suggest this course of action if you can, especially if you live in a residential area, and/or have pets/children. I generally think it’s high time we reduced our chemical use in lawns, anyway.

Finally, if budget is a concern, then there’s not much in it. Spectracide is typically considered as the cheaper alternative, although in this head-to-head, Roundup comes out on top.

Which is better for lawns – Roundup or Spectracide?

Without properly testing the two head-to-head, it would be difficult to compare results.

That said, as Roundup products tend to be more associated with killing everything, and Spectracide has a specific line of pre-emergent  “Weed Stop” products for lawns (being the less toxic of the two overall), I’d lean towards Spectracide for this one.

And for a complete, month-by-month lawn care schedule – including when to apply pre and post emergent herbicides – follow that link.

Will grass grow back after Roundup?

That’s a great question – and it depends on the type of Roundup product you’re using.

But if, for whatever reason, some of their non-selective glyphosate-based products have come into contact with your grass, then you can probably kiss it goodbye.

This article explores grass and Roundup applications in more depth.

At the time of writing, the United States Environmental Protection Agency has found “no risks of concern to human health from current uses of glyphosate.”

That doesn’t necessarily mean it’s “safe.” It’s still a highly toxic, harsh chemical, and great care should be taken with its use.

When in doubt, go organic! This article on organic gardening tips will tell you more about eco-friendly horticulture, and go here for advice on green lawn care.

Spoiler – no harsh chemicals are used!

Is Spectracide safer than Roundup?

While there’s been a lot of obvious buzz about Roundup’s active ingredient, it doesn’t automatically give Spectracide a free pass.

They’re both still potentially dangerous chemicals when used improperly. Or, even when used properly, for that matter.

In the battle of Spectracide vs Roundup, there is no clear winner – it just comes down to personal preference, and how concerned you are with using glyphosate-based products in your yard and garden.

Let me know which option you prefer and why. Do you have good results with either? Which worked well for you?

Stay safe out there, and happy gardening!

link to Lawn Thatch Causes and What to Do About It? Question Answered!

You’ve heard about lawn thatch, right? You’ve heard that along with aeration and other lawn maintenance chores, it’s something that needs doing from time to time. But what causes it? And...

Continue Reading
link to Dog Poop on the Lawn: Fertilizer or Grass Killer?

Dog poop is natural, right? Therefore, it must break down and fertilize the grass, right? Wrong! Leaving dog poop on the lawn is never a good idea.